Research and Development in Optical Microscopy

2-photon Microscope for imaging and optogenetics in live animals 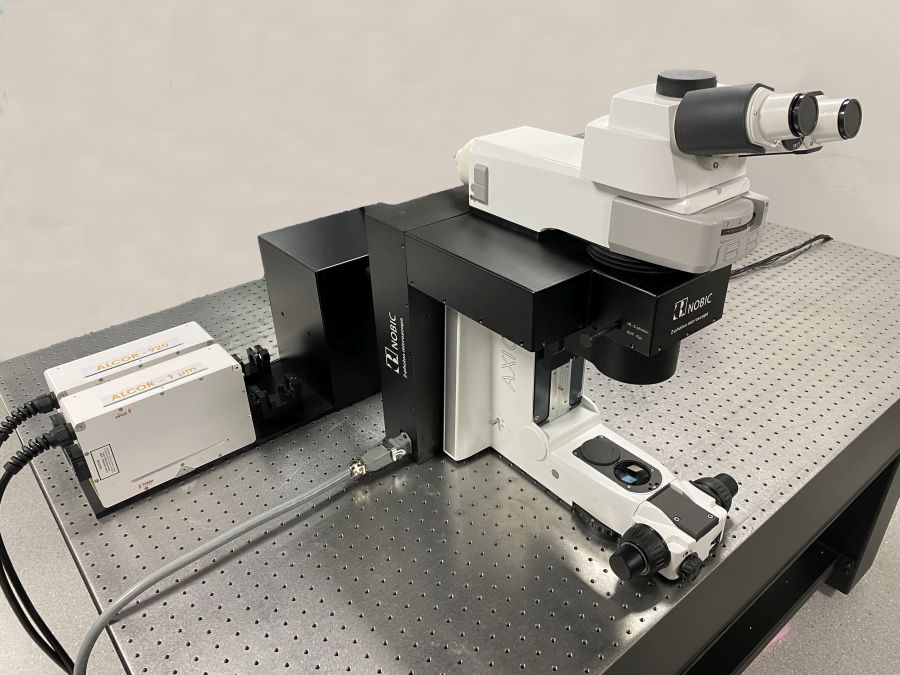 We develop advanced optical imaging techniques for in vivo imaging of biological tissues. Currently, one of our primary projects is constructing and validating custom 2-photon microscopes capable of performing simultaneous 2-photon imaging and 2-photon optogenetics of neurons in small animals. The microscopes are highly optimized and customizable to meet the demands of neuroscience research at NTU LKC Medicine. Upcoming plan includes incorporating adaptive optics to further enhance the capability of the 2-photon microscopes to preserve spatial resolution when imaging through highly-scattering biological tissues. 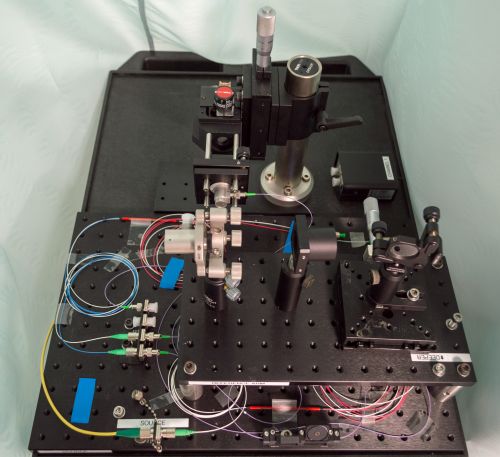 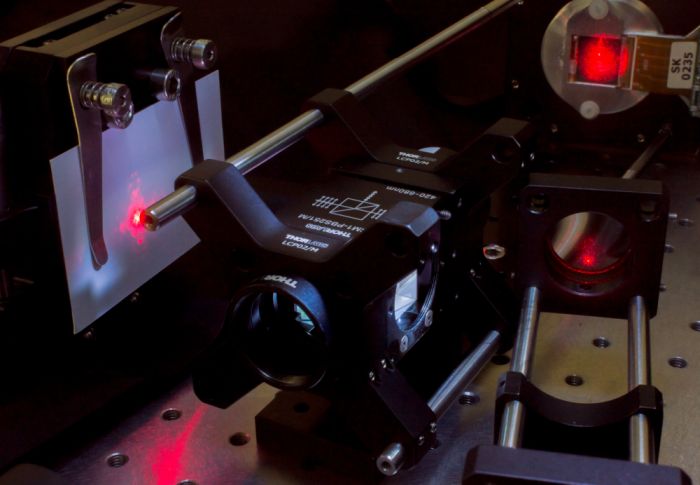 Light sheet microscopy revolutionised biological 3D imaging by significantly increasing the imaging speed and reducing light doses in comparison to traditional confocal scanning. Recent developments in the field of lightsheet microscopy aim at further increasing the imaging speed and the accessible sample volumes. We are working in this direction and probing new concepts for lightsheet microscopy based on the use of adaptive optics to manipulate the coherence and spatial distribution of light. In this way for example Bessel beams (already well-established in lightsheet microscopy) can be produce; their "self-healing" properties allow for forming thin lightsheets over extended areas and make them more robust against scattering artefacts.

Remarkable progress in the manufacturing of opto-electronics lead to devices such as deformable mirrors or spatial light modulators, which offer a large degree of freedom in controlling the beam characteristics without any mechanically moving components.Specific arrangements of modulated beams enable coherent/incoherent superposition,parallelization or time-averaging. The liquid crystal on silicon (LCoS) devices, we are using, allow us to shape the beam by manipulating the amplitude and the phase field separately.

The initial setup tests generating an arbitrary axial intensity distribution based on off-axis holography and Fourier optics. A fibre-coupled diode laser is collimated by an off-axis parabolic mirror and a polariszer generates a high polarisation ratio light beam. The laser beam then passes through a half wave plate which rotates its polarisation direction to fit well the ferroelectric liquid crystal SLM. We can get different intensity distributions around the fourier plane responding to different computer-generated patterns displayed on the SLM. Incoherent light sheet array will appear in coming updated experimental configuration. 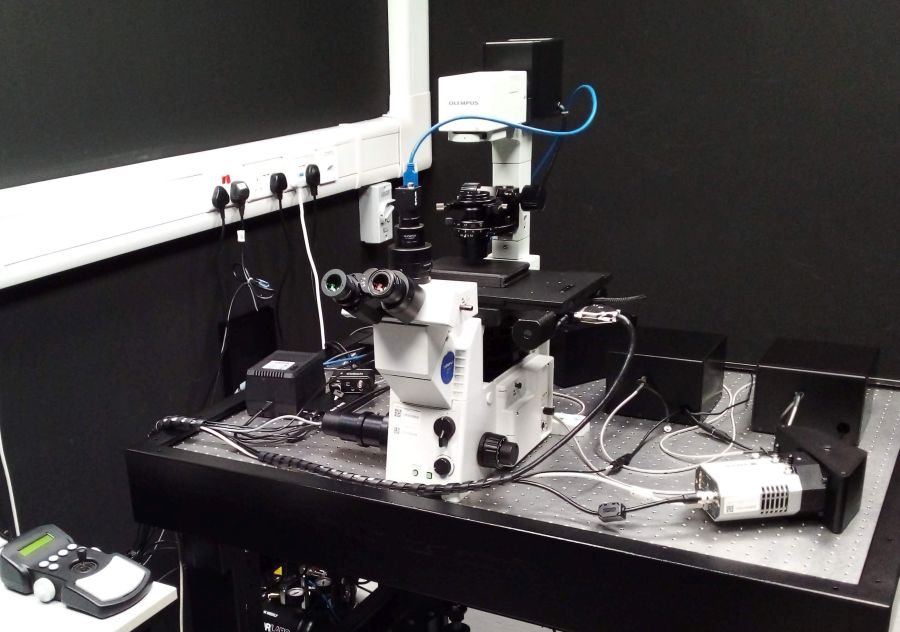 We are developing a custom microscope for confocal Brillouin and Raman micro-spectroscopy. Brillouin and Raman scattering are both non-elastic light scattering processes that can provide label-free image contrast in a variety of biological as well as material sciences samples. In Raman scattering, the photons exchange energy with molecular vibrational modes and the spectra contain qualitative as well as quantitative information on the chemical composition of the sample. Raman spectral fingerprints have proven a powerful tool for non-invasive microbial strain identification. In Brillouin scattering, the photons exchange energy with density waves (acoustic phonons) in the material under study. For homogeneous media, this information can be readily interpreted in terms of elastic moduli of the material. In this way, Brillouin spectroscopy is commonly employed in material science for non-invasive mechanical testing. However, in inhomogeneous systems such as any biological material, the interpretation of Brillouin spectra is much more complicated and a simple theoretical model is lacking. Therefore, Brillouin microscopy has not yet become widespread in biological and biomedical research, despite its high application potential in this field.

It has been shown that the Brillouin shift in biological samples correlates with water content [Wu P. et al. (2018) Nat Methods 15, 561–562]. We aim to circumvent the ambiguities of Brillouin spectra of biological systems by utilising the chemical information provided by Raman spectra and to map simultaneously chemical composition and mechanical properties of the systems under study. 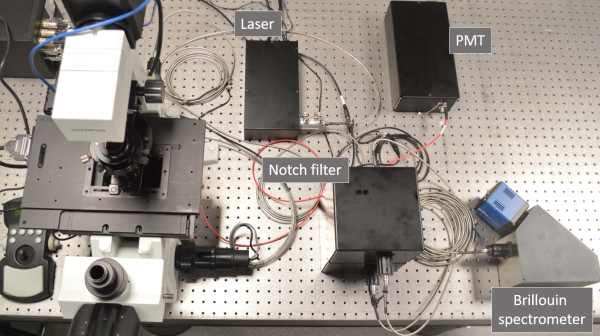 The microscope is built around a commercial inverted frame (Olympus, IX-71); it contains two lasers, 561 nm for Brillouin and Raman scattering and 488 nm for confocal fluorescence imaging. Raman spectra will be recorded by a custom-designed spectrograph with a CCD camera. The technical challenge in recording Brillouin spectra lies in the closeness of the Brillouin peaks to the peak of elastically scattered photons (Rayleigh peak), which is many orders of magnitude more intensive than the Brillouin peaks. This means that high spectral resolution together with efficient suppression of the Rayleigh peak are necessary. To meet this challenge, we use custom-designed common-path interferometric filters (two in a series) and a virtually imaged phase array (VIPA) spectrograph equipped with a scientific CMOS camera. The design is an improved version of a previously described setup [Karampatzakis A. et al. (2017) npj Biofilms Microbiomes 3, 20] and its detail can be found at our GitHub repository. Alongside the hardware, a user software has been developed for intuitive an efficient operation of the setup.

We are developing a new generation of high content screening platform for simultaneous 3D live imaging of more than 1,000 organoids. The data obtained on gastruloids and liver organoids will be analysed using unsupervised machine learning to provide new quantitative statistical analysis tools characterizing the diversity of morphogenetic movements within each organoid. Using correlative clustering, we will then demonstrate how such quantification can lead to individual organoid outcome prediction in a non-destructive way. Our group is responsible for designing and building the optical and optomechanical parts of the two prototypes and the final instrument. 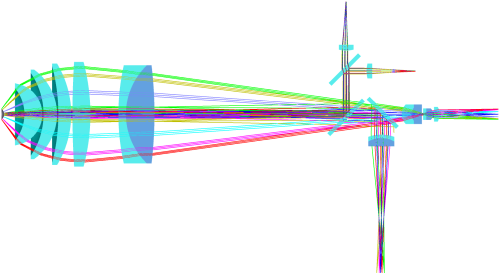 We have designed an optical system for fluorescence imaging of a large field of view of a highly curved corneal surface at chief ray normal to surface. Cornea positioning and fluorescence excitation beam homogenized over a large area will improve image signal-to-noise ratio. The system promises to overcome the limitations of current methods for diagnosis of corneal diseases, the third major cause of blindness worldwide.

Hyperspectral OCT (2021-2026): Developing hyperspectral OCT as a clinical test to detect neural dysfunction in degenerative diseases of the optic nerve and retina (CRP24-2020-0077)

The project aims to develop an ultra-wide band optical coherence tomograph to be used to assess retinal function of the human eye that could lead to the detection of neuronal dysfunction in both Alzheimer’s disease and glaucoma.

S. epidermidis and C. acnes are two of the most common bacteria found on the human skin. C. acnes, being an aerotolerant anaerobe, cannot grow as a monoculture biofilm in an aerobic environment. However, when co-cultured with S. epidermidis, C. acnes is able to grow. This lead to a hypothesis that S. epidermidis is receiving some metabolites from C. acnes thus increasing the respiration rate of S. epidermidis. This in turn creates an environment with lower oxygen concentration to support the growth of C. acnes.

In collaboration with Dr Viduthalai Rasheedkhan Regina and Prof. Scott Rice (SCELSE, NTU), O2 NS was synthesized for the detection of oxygen levels in S. epidermidis and C. acnes biofilm. The goal is to use the O2 NS to track oxygen consumption rates of S. epidermidis over time when co-cultured with C. acnes in a biofilm. Plate reader assay will provide high throughput, while confocal imaging will determine if there are zones with differences in oxygen gradient in the biofilm. 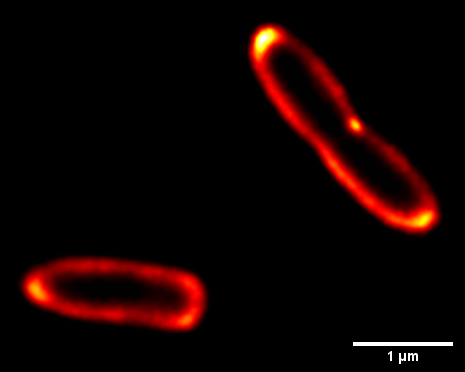 Investigating structures of a small bacterial cell is challenging especially structures that are smaller than the diffraction limit (~200 nm) of a light microscope. Super resolution imaging techniques, which won the Nobel Prize for Chemistry in 2014, can distinguish structures below 200 nm. SMLM is capable of resolving structures as small as ~20 nm, was applied to image bacterial membrane and nucleoid. Optimising SMLM of bacteria forms a part of the study. Point Accumulation for Imaging in Nanoscale Topography (PAINT), a type of SMLM, image of Nile red dye in the membrane of live Pseudomonas aeruginosa is shown as an example. We collaborate with Dr Anuj Pathak from Prof. Birgitta Henriques-Normark’s group in LKCMedicine on this project.